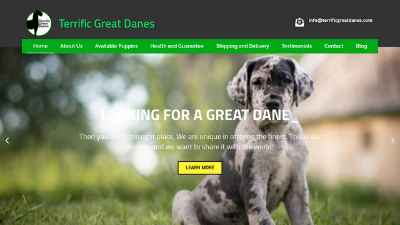 Usually when we talk about malicious sites that Webshrinker finds, we’re referring to sites that deploy some sort of malware or phishing attack. These are sites designed to capture login information that can be used for nefarious purposes.

But some malicious sites are looking to do something else. They don’t want to infect your computer or steal your passwords. They’re looking to scam you out of money by creating websites that claim to sell products that will never get delivered.

Recently, I had a run-in with a dog breeder scam that led me to uncover a well-constructed web of scam websites. Based on the discovery of a single scam website, I was able to discover hundreds more.

A few weeks ago my wife got a call from her sister. She had a feeling she’d been scammed, and since I work with malicious domains, she was interested in seeing if I could take a look at the website.

For the background, my sister-in-law decided to get a dog. She settled on a mini Australian Shepherd and she started researching breeders. This type of dog usually costs around $1500. But my sister-in-law found one breeder that had dogs available for $750 and $800. It seemed like a great deal.

This particular breeder also ships the dogs. This might have seemed strange in another year, but with COVID impacting every business, it seemed reasonable. The breeder even arranged for a nanny to accompany the puppy my sister-in-law would be adopting to ensure the dog would be well cared for on its journey.

It was after my sister-in-law paid for the dog that she began to get suspicious. While she was told there would be no extra fees after the payment of $750, the shipping company called her up and told her that they couldn’t ship the dog until she paid $950 as insurance. She pressed the breeder to cover the cost. But since the breeder claimed my sister-in-law was now the legal owner of the dog, the coverage of the insurance was up to her. Not the breeder.

This is when I got involved.

Down the rabbit hole

I started with the breeder website and started noticing that things seemed off. There was language on the privacy page that was worded poorly and just seemed strange. The shipping page was easily the most detailed page on the site.

But it wasn’t until I looked at the shipping status notification that I started to understand the enormity of this scam. The shipping service was a courier I had never heard of before. Their site was comprehensive. They seemed to have a range of services related to shipping, and these pages were full of details. On their homepage they even highlight their partners.

The tracking notification is where the site started to seem suspicious.

On this page I noticed a typo: “United State.” This page also had custom messaging that doesn’t seem right for a courier service. It included the dog’s name and the status of the dog. The current status for my sister-in-law’s dog was “on hold.” This was because she hadn’t paid for the insurance.

I noticed the final digits of the tracking number (also in the URL) were “20.” As an experiment, I changed the final digits to “19” and “21” to see if I could see other tracking notifications. As it turns out, I could. They were all other people who had purchased dogs. I found other victims. I could see their names, addresses, the name of their puppy, and some other details.

These tracking notifications were in statuses other than “on hold”, some of them were “pending” and “flight activated.” I decided to share this with my in-laws. They called one of the other people I found on the shipping site. They got a hold of an older couple who had adopted a dog and chose to pay the insurance money. They were out $2,000 in total. At this point, they knew they’d been scammed.

Now that I had confirmation that these two sites were indeed scams, I put them into Webshrinker and started looking for similar sites. That strange copy I mentioned on the dog breeder site was instrumental in finding over 500 other similar scams.

Many of these sites are hosted on the same domain hosting provider. The dog breeder sites seem to be shorter lived, active for about 6-8 months before being deactivated, while the shipping sites were active for years. The similarities shared between all of these sites suggest a larger operation, possibly run by the same individuals.

These scams seem to have been going on for a long time. While a majority of the breeder domains are new as of 2020, some of the shipping sites go back about 4 years. Based on my estimates:

The breeder sites are likely reported and shut down one-at-a-time after multiple complaints. But it seems like it’s harder for individuals to link the shipping scam directly to the dog breeder scam, or even know that they’re doing anything wrong at all unless you were part of the scam.

Since I was able to see tracking information for multiple victims of the scam, I can say that this site has scammed a minimum of 24 people between September 28 and December 2. Based on how much these dogs sell for, the scammers have made at least $18,000 just off of those 24 families hoping to add a puppy to their family. And to be clear, this was only on one of the shipping sites.

I can’t even imagine how much this operation is profiting off of this website scam.

“Am I getting scammed?”

There are a few details in the original story that I didn’t go into because I wanted to clearly mark the warning signs at each phase of my sister-in-law’s journey. If you think you’ve run into a scam breeder (or a more generic scam), these warning signs should help you avoid questionable websites altogether.

1. Beware of something that’s too good to be true

All of the dog breeder websites found by Webshrinker list their dogs as 50% off the usual cost of a purebred dog. This is a big part of why this scam is so successful. People fall in love with a dog breed but know it’s expensive. They start to search for less costly options, and they find a site that promises a healthy dog delivered in just days.

Real breeders can’t promise what these scams can. Dogs rarely cost less than $1500 and if you do get the dog shipped to you it will take some time.

2. There’s only a single picture of the dog

You should have the option to see the dog you’re bringing home. And if the dog is really available from a breeder, there should be multiple pictures of the dog—or even a video—of the dog playing. Better yet, ask for a video of the breeder with the dog in it while holding up a sign with the current date written on it.

I couldn’t find evidence of these dog images being stolen from other places on the web, but it’s still strange that there is only ever a single picture per available dog. My assumption is that these images are taken from private Instagram or Facebook accounts that search engines like Google can’t index in their image search results.

Don’t agree to send money to a dog breeder over Venmo. Something we learned during this experience is that Venmo should exclusively be used to send money to people you actually know, such as friends or family. Venmo’s policy for getting a refund is for the person who sent the money to reach out to the person they gave it to and ask for it back. That doesn’t work well when you’ve been tricked into handing over $750.

Some of these sites also give the option to pay with Bitcoin or other cryptocurrencies—they’ll even give very detailed directions on how to do this. This is another red flag.

4. Look out for bad grammar and typos

Between the breeder and shipping pages, there was strange wording everywhere. Sometimes it’s not obvious that the grammar is poor. The text just seems off somehow.

Places might be misspelled, or even the name of the dog breed you’re searching for. If misspellings are repeated, that’s a huge red flag.

One thing all of these sites have in common is a contact form (and nothing else) on the contact page. They’ll usually include an email but no phone number. Real breeders give you options to call them, times they’re available, or pick up windows.

6. They only seem to ship their dogs

You should be able to visit a breeder to see the dog you’re thinking about bringing home. While some breeders do allow purchases from outside of their area, sending the dog on an airplane isn’t the only viable option. Some breeders will hire someone to drive the dog to you (at an additional cost), or they’ll request that you come to pick up the dog. COVID has made all of this harder, of course.

But if the only option the website gives you is to ship the dog via plane, really dig into this breeder.

A lot of the sites I found had social media icons that didn’t link to social sites. I also found footers that still had template information.

If you think a dog breeder is suspicious, try searching for them in Google. You might find them on breeder scam websites or a complaint from the better business bureau.

Another indicator is when you can’t find additional information anywhere. Most of these scams won’t have mentions on other sites or Yelp reviews. To the rest of the internet, they don’t really exist.

Where to report fraudulent websites

You should report scams to the Internet Crime Complaint Center (IC3) or usa.gov.

So far, I’ve reported this scam to multiple places and am hoping that these findings can help end this fake dog breeding operation so that other families don’t find themselves in the same position as my sister-in-law.

We curate our sets of categories very carefully, and only update them after thorough consideration. Here are the newest Webshrinker categories.

read more
This is some text inside of a div block.
September 13, 2021
Inadequacies of Domain Classification & Parental Controls on Mesh Router Systems: Part 1
January 21, 2021
How To Identify Fake Websites

Ready to brush up on something new? We've got even more for you to discover.

Secure Your Organization Without Slowing Down

Content filtering for end-user protection. Block security threats and inappropriate content with DNSFilter.
Thank you! Your submission has been received!
Oops! Something went wrong while submitting the form.